Mississippi Researchers Use Dye to Spark Revolution in Medical Imaging 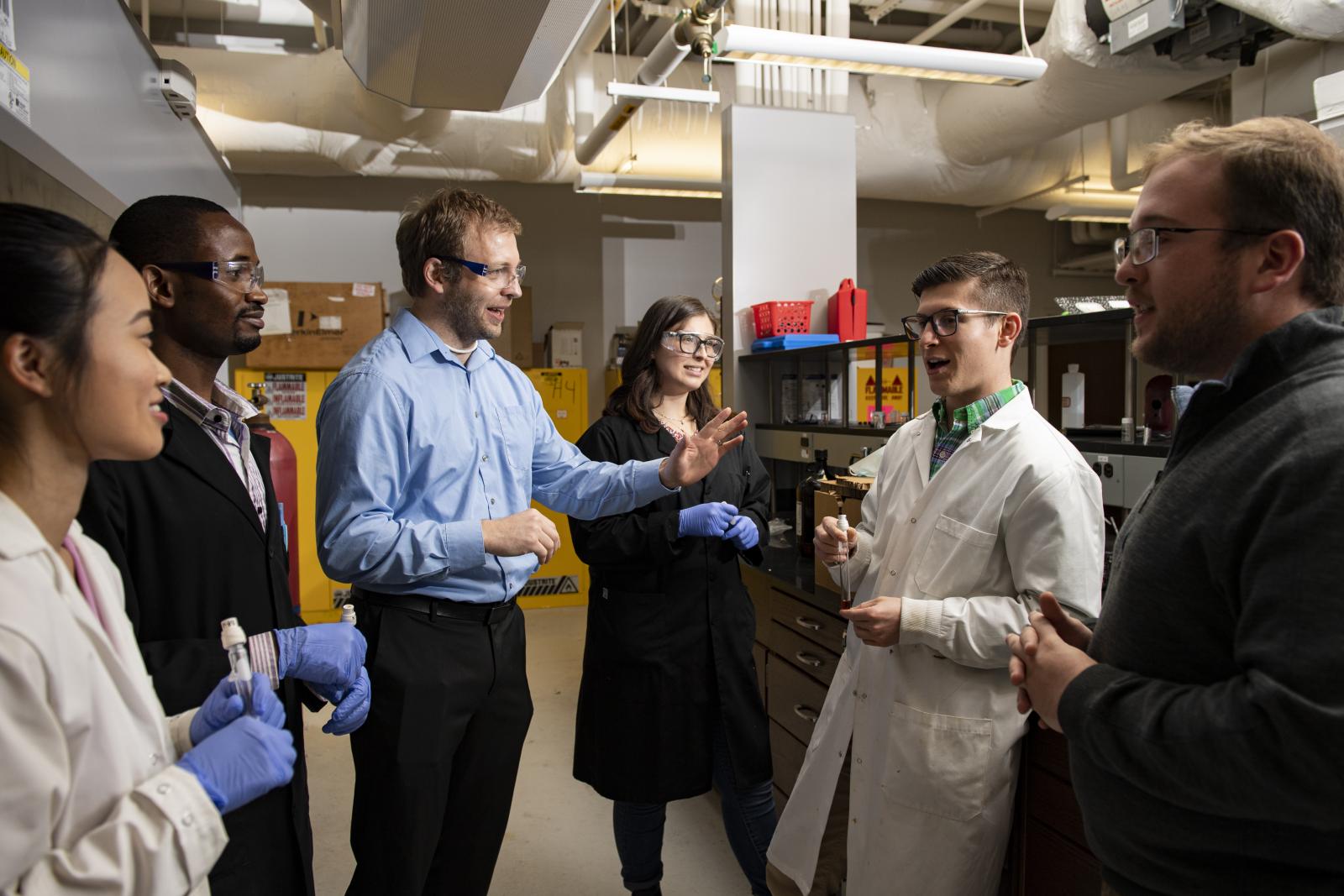 The most common size of a brain aneurysm is believed to be about 2 millimeters in diameter.

But, current medical imaging techniques are limited to finding larger aneurysms between 5-10 millimeters, leaving most cases undiagnosed. Advances in imaging technology have the potential to save hundreds of people every year. Mississippi EPSCoR research is ready to make this possible with a dye that will allow medical professionals to find aneurysms down to 1 millimeter in size.

As a result of Mississippi EPSCoR research, a new medical imaging solution may soon be available, which will be more affordable with significantly improved image quality and reduced imaging time. It is almost comparable to having a camera inside a living human, without the invasiveness of endoscopy or surgery.

Dr. Jared Delcamp and Dr. Nathan Hammer from the University of Mississippi and Dr. Colleen Scott from Mississippi State University have been collaborating on the design of an advanced contrast agent that can be used as a dye that is injected into the body for various angiography procedures. While angiography already exists, this new form of dye will bring the procedure and the entire line of medical imaging to a new realm. By changing the contrast agent, this new solution will allow medical professionals to see instant HD-quality images and video from inside their patients. This advancement will revolutionize medical imaging and allow doctors to more effectively identify aneurysms, internal bleeding post-childbirth, arterial blood flow restrictions, and other blood flow-related issues.

There is a selection of available medical imaging options in clinical use, such as MRI, CT, Sonogram, and X-ray. Each has a different method to produce images of patients’ bones and internal organs. MRIs use magnets and radio waves to help identify abnormal tissue; CT scans and X-rays use high-energy photons to display bone fractures and internal organs; sonograms (or ultrasounds) use sound waves to depict an image; fluorescein angiography is the injection of a dye along with the use of medical equipment such as X-ray or fluorescence imaging systems that require surgery for internal imaging to examine how the dye flows through blood vessels and major organs. These imaging methods are too slow, invasive, or use energy types that cannot image soft tissue and blood flow take anywhere from 15 minutes to a few hours for a quality image, depending on what part of the body is analyzed and the technique used. Even then, professionals may need to take a large number of scans to capture what they need for a diagnosis. Along with the lengthy time it takes to capture images, the currently used fluorescence dyes for angiography available for medical imaging give image quality that is an inferior low-resolution image and therefore ineffective.

Contrast agents are part of a class of materials referred to as cyanines or donor-acceptor-donor materials. Currently used cyanines are either low-resolution materials or require dangerously toxic doses to see clearly, so researchers have been in constant search of improving the contrast agent since before the 1950s.

By designing and characterizing molecules in the xanthene class, Drs. Delcamp, Hammer, and Scott have introduced the first new class of materials to the high-resolution discussion in about 70 years. Xanthene is an organic compound that is used in the new contrast agent. The makeup of the dye with this xanthene contrast agent is called Rhodindolizine. Xanthene has been utilized in many different materials for a very long time. It provides incredible brightness, allowing medical professionals to view images with only a small amount of dye in the system.

The researchers have fine-tuned the compound so that xanthene can be imaged with high resolution for the first time by using it in the short-wavelength infrared (SWIR) spectral region. After thousands of attempts published in literature by the synthetic community, the EPSCoR Center for Emergent Molecular Optoelectronics (CEMOs) researchers have discovered the missing piece in contrast agents that will move the medical field from low-resolution imaging to this proposed instant, high-resolution solution.

The CEMOs research teams have been working together across universities to synthesize the Rhodindolizine and make this discovery. The Delcamp and Scott teams partnered in a divide-and-conquer fashion, each working on perfecting the xanthene-derived compound separately and reporting their findings to one another to speed up the rhodindolizine enhancements. Other EPSCoR research teams make molecule variation predictions prior to testing, developing biological test methods, and making plans to make the dye appear even brighter in images.

Since the CEMOs team first published their novel findings, researchers worldwide have been inquiring about this new material. Investigators from the University of Illinois Urbana-Champaign (UIUC), the Chinese Academy of Science, Harvard, Michigan Medical School, and many others are anxiously anticipating the material’s debut so it can be tested in animal models and put to clinical use.

The initial discovery, published in The Journal of Organic Chemistry, has resulted in a U.S. patent application and generated international attention. Now, the teams are working on next-generation designs to increase the imaging resolution even further and increase the duration of time in which imaging can occur.

“We have already seen dramatic improvements in how long the contrast agent survives in practical settings. We are now moving toward designing a suite of materials to give multiple channels for imaging several parts simultaneously,” says Delcamp. They plan to fully design the new molecules before widely distributing the materials to the academic community.

This new dye opens up a tremendous number of future possibilities, especially for high-stress situations like blood-flow restrictions or internal bleeding after childbirth when it is difficult to know from where the blood is coming. There is no time to wait for an MRI during internal bleeding, which is currently one of the most significant risks to mothers during childbirth. This technology can allow doctors to see the issue in HD quality, real-time video instead of the guesswork they are using today.

In a similarly stressful scenario, when working with a blood vessel in the heart, doctors must take an x-ray simultaneously as they are injecting the dye since it dissipates so quickly. Where the current dye used to detect internal bleeding dissipates within seconds, this new molecule design will allow doctors to see the dye for a much longer amount of time within the body and more accurately identify and stop the cause of the bleeding.

Not only is the dye proving to be the medical community’s next best friend, it further proves its value in the efficiency it provides. MRIs are timely and expensive, but this new product takes a fraction of time compared to an MRI and costs about a tenth of a standard MRI, too, the researchers say.